Can I get moles and cysts removed on the NHS? If your GP has any concerns about your moles or cysts you will be referred to a dermatologist. This specialist will diagnose whether there is any need to remove them – in which case it will be done via the NHS.

If the mole or cyst is harmless the NHS will not remove them – even if you feel they are impacting your appearance negatively. This is because it is deemed a non-essential or cosmetic procedure, rather than a medical need.

What’s the difference between a mole and a cysts?

The medical term for a mole is nevus. Basically they are a type of skin growth which is very common. They are caused by melanocytes, which are clusters of pigment-forming cells which create a brown spot of varying size. Most moles are flat, but some are slightly raised.

They usually first appear during childhood and some people will get more moles as they get older. Some moles may become more obvious over the years while others may actually fade.

Moles are usually harmless but they can sometimes become cancerous. You may have heard the term malignant melanoma, which is a type of skin cancer that starts cells in the skin called melanocytes. If you have any significant change in the appearance of a mole, you should consult your GP. However, a change to a mole does not automatically mean you have cancer.

A skin cyst is a lump filled with fluid which sits just under the skin. They are formed by cells in the top layer of the skin which produce keratin. Usually these cells eventually move to the skin surface where they are shed, but sometimes they go deeper and start to form a sac which becomes a round dome-shaped lump on your skin. They may be white or yellow and some will have a small amount of pus inside, which is why they can be confused with boils.

Cysts can appear on many parts of the body, including the face, neck, chest and sometimes on the scalp – these will be pillar cysts that form around hair follicles. They can also form on the eyelid, called meibomian cysts.

Like moles, most skin cysts are harmless and sometimes they will just disappear. But it is best to get a cyst checked out with your GP to make sure that there is nothing more to it, especially if you think it has become infected. If it is, then the GP may prescribe antibiotics.

Again, just as with moles, cyst removal is unlikely to be carried out on the NHS unless the GP refers you and the dermatologist agrees.

What if I really want to get rid of a mole or cyst?

In that case, you will need to pay for treatment at a private clinic. This will usually involve an initial appointment with a doctor to discuss what you want to achieve, your aesthetic options and which will be the most effective treatment for you. There will be a fee for the consultation but this is often fairly minimal.

For moles and cysts you are likely to be offered minor surgery – excision or shaving. The procedure doesn’t take long and you will be able to carry on with your day as normal afterwards.

Private clinics set their own charges but as a rule of thumb you should expect to pay around £350 for a single removal, with a sliding scale if you have two or more removed at the same time. If you want to include histology (checking the tissue to make sure there are no abnormal cells) there will usually be an additional charge.

If you decide that you would like to go ahead with private treatment, as with any clinic and treatment we suggest you do some research beforehand. Check the expertise of the staff, clinic reviews, what quality controls are in place, whether your treatment is guaranteed, and the fees you should expect to pay.

As an example, at Brigstock Skin & Laser you can book an initial private appointment to talk through your options with an experienced aesthetic doctor costs from just £39. We are registered with the Care Quality Commission and offer a comprehensive results guarantee. You are welcome to use our standards as a comparison with other clinics! If you would like to find out more or make an appointment, call us on 020 8683 6730 or email hello@brigstockskinandlaser.com. You can also book your appointment online here. 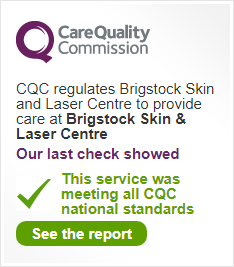